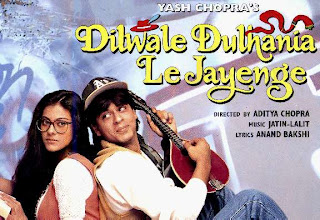 For almost fourteen years now, Maratha Mandir, the single-screen theatre near Mumbai Central station begins its day with a show of this great saga of love. Every single day in all these years the imposing personality of ‘Bauji’ feeds the pigeons at with his famous and familiar chant of “Aao”. And almost involuntarily receives his wife’s call on reaching his shop. Chhutki is still ‘Chhutki’, and Simran’s world of dreams still raises curtains, every single day, over the face of arguably the best romantic hero in Hindi film history. A film that is, in every sense, Indian, and a great example of what Hindi cinema stands for, DDLJ has always been an important movie. But you have not seen it until you do it at Maratha Mandir.

We were waiting for a special day. And this 30th of August, being my brother’s birthday, was chosen for this special show. For those who think (even I did till that day) that this continuous run at the theatre is a fluke, it is even more important to go and take a first-hand experience. There were not less than 600 of us in the theatre for that show, the balcony being houseful. Would you believe that we actually got the balcony seats for black- ‘bees ka tees’. It only added value to our trip to, what my brother called, this museum, without adding any trouble to our pockets. Getting a black ticket for Rs 30! And then the ambience, all decorated with mirrors and glasses of all colours, we actually felt transported to the 90s, when the standards of Hindi films had reached a shameful low and when this Aditya Chopra love story had kick-started a new movement altogether. Carrying on with the Rajshri formula of wholesome family entertainment, DDLJ opened the floodgates of the huge NRI market. Setting of a Hindi film in a foreign land, with an essentially desi heart, as an important story tool became a trend of the decade, something that in the days to come would turn into a cliché, along with a mom-friend for the girl and a cool Pops for the boy, and the climactic ‘Ja beti’ or something like that.

But the impact that these now regular stuff have during the three-hour run of this beautiful, heart-warming, musical romantic-comedy-of-sorts is unparalleled. As the film began with the tunes of ‘Ghar aa ja pardesi’, I could feel goose bumps all over me, a strange thrill, close to a shiver and eyes blurred with a tear-film of unbelievable joy. It was not the emotion of the story that touched me; it was the pure magic of cinema, testimony to which is this unique theatre, where every morning that sound of Raj’s mandolin triggers a reaction among the crowd that is hardly there in the films released these Fridays. As Simran sits sulkily in her home, having accepted her fate, the tune haunts her incessantly, only to finally get real into the celebrated return of the prince for the rescue of the princess, marked by a bell on an Indian cow. One of the most loved romantic songs of all time follows and the audience roars in approval. “Ise kehte hain reaction”, my brother added. And it was the only film where we didn’t feel irritated at people mouthing lines along with their acquaintances on screen, (not really) predicting the resounding slap Raj is about to receive and adding that touch of “To kya hua agar….”. We didn’t mind all this, because all of us in there were celebrating cinema and this magical film which, like all great love stories, seems to live forever. As ‘Pops’ corrects Raj (when he says ‘Wo zamana aur tha Pops’) – “Mohabbat ka naam aaj bhi mohabbat hai bete! Ye na kabhi badli hai, aur na kabhi badlegi.”

Posted by satyanshu singh at 10:22 PM