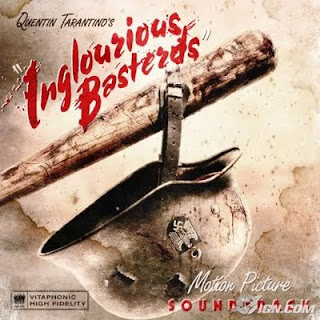 Chapter 1: Basterds
At Fame, Inorbit last week, I had the fortune of watching a Tarantino film in theater for the first time. And since during this period between his last film and this I had covered his complete filmography, it was indeed eagerly awaited. For the first time I was eager to experience a fresh film of a foreign film maker with whose works I was completely acquainted and in love. The certificate by CBFC, India kickstarted this unforgettable experience. But there was an error. It read 'Inglorious Basterds.' A female voice from behind me announced - "Spelling mistake!" I forgave her. Perhaps she was not aware of this famous 'mistake' in the title of the movie she had come to watch. That when it is Tarantino, 'bastards' can very well be spelt 'basterds'. I forgave her; she was wrong because she was ignorant.

Chapter 2: Inglourious
But then it hit me hard. The movie is called 'Inglourious Basterds', an extra U in its first word apart from the E replacing A in the second. And the CBFC certificate showed 'Inglorious'. May be the lady behind me knows about Tarantino and the movie indeed! May be she is not ignorant at all. And that means she is damn correct about the 'error'. So, this time I forgive CBFC. The point is - however hard you try to know and predict Quentin Tarantino, he still manages to surprise you. You felt you have done it right when you wrote 'Basterds' instead of the literal English-language word. But you still missed a U. You still missed a Tarantino trademark, a beautiful detail.

Chapter 3: Glorious Basterds
After an utterly forgettable 'Grindhouse', Tarantino is back in style. And it was a pleasure to see how he celebrates his love for cinema in this film, and leads us to an unforgettable climax that challenges the history known to man. They say he is getting repetative. I don't care. As long as he does his stuff the way he does his stuff, we're gonna love him. After all, really, we havent seen a lot of things, until we see them through the eyes of QT.
Posted by satyanshu singh at 11:23 PM