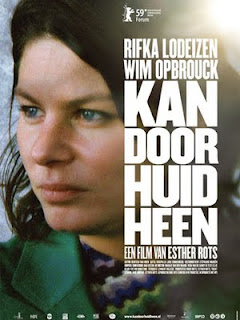 Among my friends doing internship, stories of people sleeping in the operation theatre while holding the retractor beside the patient was common. The way the limits of my body are being stretched these days, I have started to believe those stories. Today, finally, I slept through an entire movie. It was a short one and so was my much needed nap. I feel guilty about that, but I should not. Finishing nineteen movies in four days is something remarkable in itself, I suppose.

And the four movies of today were so good, a definite rise in standards from yesterday's stuff. Goodbye Solo, was a Jim Jarmusch-like story about this taxi driver who develops friendship with a seventy-something man with secrets of his own. Den Peremozhenykh (The Day of Defeated) was a colourful satire set in the changing political scenario in Ukraine, where a death and the funeral guides us through the minds and mannerisms of these interesting characters of a small town, reminiscent of Fellini's Amarcord. The near-perfect Turkish film Uzak Ihtimal (Wrong Rosary) generated an unprecedented audience response on the sweet love story of Musa, a Musilm muezzin and Clara, a Christian nun. But for me the biggest high of the day was this psychological Dutch crime drama, Kan Door Huid Heen (Can Go Through Skin), a post-traumatic study into the mind of Marieke, which was achieved by the innovative use of montage and sound design. It taught me a thing or two. It was a movie I would love to make.

The actor of the day would be Nadir Saribacak for his restrained performance in Wrong Rosary. He underplayed it so well, he made it difficult to appreciate his performance. I am sure everyone in the audience loved him for being Musa.
Posted by satyanshu singh at 12:51 AM