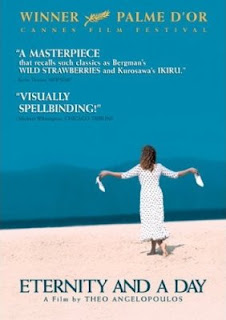 He: Tomorrow... How long does tomorrow last?
She: An eternity... and a day.

Mumbai 2009 is having a retrospective on the legendary filmmaker from Greece, Theo Angelopoulos. This film that I saw today features commonly in 'Greatest Films Ever' lists. The eight-minute long closing shot can definitely be considered as one of the best closing shots in cinema history. But this experience had a price.

Instead of the usual festival venue at Fun Republic, Andheri, this morning we started for Ghatkopar. Didn't know the route. Didn't know exactly how long it would take. The first bus we took broke down. 20-25 minutes got wasted. The other bus we took got caught in the morning traffic over the WE Highway. We didn't have time. Decided to take a cab. It took 160 bucks, but we reached the gate of the Mall precisely on time. As we entered, the guards told us that it was the wrong gate. We had no time left. And the mall is too goddamn huge. So, we had to sprint - it was the only way out. Ran all around the campus. Entered. Lifts not working. Rushed over the dead escalators and reached the third floor. All this while, we could not find any other delegate in sight. Is this a wrong address? - was out worst fear. But then we saw the poster of the film fest. And finally, as we try to rush into the theater, the security person says that the show has been postponed. We were 75 minutes before time!

While waiting for the first movie to start, knowing very well that tonight's last movie would not end before 11pm, we thought we our day was screwed. But it turned out to be perhaps the most fruitful day of my cinema experience. After the opening Greek movie, each movie that followed was special, each capable of making your day, giving you a high, and today there were five of them, back to back. Well, this indeed is a film festival.

Ausencia (Absence), a Mexican crime drama; Eastern Plays, the story of two brothers among the misguided youth of Bulgaria, that had bagged Best Film and Director awards at Tokyo, 2009; La Belle Personne (The Beautiful Person), perhaps the best teenage romance I have seen, perhaps because no one does it better than the French; and finally Andrzej Wajda's Tatarak (Sweet Rush) from Poland, an unbelievable fusion of real and fiction. Would like to mention Krystyna Janda's as the performance of the day, not only for the psychological layers she displayed as Marta, but for the spirit with which she played herself - Krystyna, the actor, suffering with the loss of her real-life husband, and shooting for this Wajda film. Confused on reading this? Many there were confused after the movie as well. Just take this - this film was awarded the Alfred Bauer Prize at Berlin 2009, the award which is given "to a movie which opens new perspectives in film art." This did just this. The eternity of these films made my day!
Posted by satyanshu singh at 1:23 AM