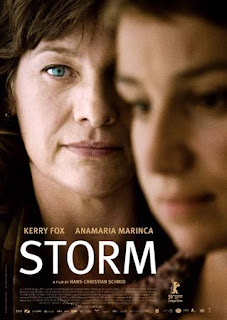 Chronic severe sleep deprivation. I look like a zombie.

Sturm (Storm), an intense and gripping political thriller based on the atrocities caused to Bosnian Muslims by Yugoslavian National Army.

Menteur (Liar), about this Belgian guy whose failure has turned him into an obsessive compulsive liar.

Katalin Varga; a Romanian drama: what happens when Katalin has to leave her home and her husband as he discovers her past and the truth behind their son.

I can't see it as I move about, but my face talks to me like a zombie.

Pick of the day: Sandali Khali (Empty Chair), a surreal Iranian fantasy discussing life, death, chance, and the responsibilities of the creator. Thought Iranian movies are all about simplicity. Not when the director is Saman Estereki. Met him. Says things are always between real and unreal for him. Took interest in my interpretation of his abstract stuff.

Performance of the day: Kerry Fox for Storm.

"Sex is overrated. I'm fine without it". (from Seven Minutes)