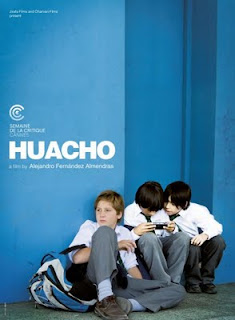 All these days, I was watching movies with a certain detachment. Unlike my nature, I was subconsciously keeping myself at a distance from the characters I saw on screen. Perhaps that was the only way I could have finished 34 films in seven days. At the end of each day I was planning the next and hardly thought about the films I had just saw. It was a non-sentimental approach of celebrating cinema in a mad mad rush.

On the last day, however, after the last movie, I had this feeling - 'FIN' (as they say in French for The End). As I sat at Marine Drive, I recalled all the 34 movies and saw those characters standing there, looking at me. I just realized that I was going to miss them, and miss this experience. At that moment I felt what I had witnessed, their complicated lives and deaths and hopes and desires, from diverse cultures and belief systems. I felt then that my exhaustion is not merely physical but emotional as well. I felt drained. I longed for more of it, although I knew it had become physically impossible for me to watch one more movie. When it has ended, I finally find myself attached to it.

I spent the last day of the fest at Metro, and the movies of the day were:

The Last Thakur, a thriller from Bangladesh.

Singularidades de umarapariga loura (Eccentricities of a Blond Hair Girl), a Portuguese short-story, perhaps the only avoidable movie I saw during these seven days.

Complices (Partners), the closing movie for me, a French murder-mystery involving teenage crime and sexuality.

And the two movies which made the day special:

Tres Deseos (The Three Wishes), a Kieslowskian drama from Argentina. From writing to use of background score, this deeply psychological account of a married couple's weekend trip to Colonia reminded me strongly of Trois Colours trilogy. The tribute to Kieslowski was evident as Victoria talks about a scene from Trois Colours: Bleu. A definite re-watch.

Huacho, a neo-realistic take on the life of this rural Chilean family. It was honest, affecting, and beautiful. Although the pace was such that many left the theater mid-way. But I loved it.

It has been a beautiful week, one of the most beautiful of my life. The experience has ended. The hangover has merely begun. Gifted myself a red rose as I finally moved towards Churchgate station to catch the train to home... Life is beautiful! Cinema is forever!!
Posted by satyanshu singh at 11:36 PM