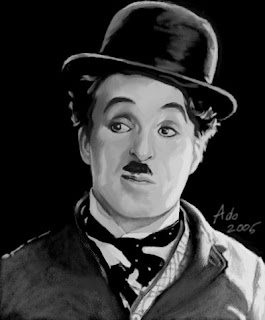 Whenever I thought of 1914, the only word that came to my mind was World War I. But now I have a better reason to remember that year. It was fateful indeed.

A 25-year old Englishman by the name of Charles Spencer Chaplin appeared on the cinema screen, in as many as 35 short films, 25 of which he had directed himself. All this in a single year! If 'arriving with a bang' needs an illustration, can anything be greater than this!

Before The Kid (1921), which can be considered his first major feature-length film, he made another 35 short films. But then, as came the 1920s, his career had a remarkable change. He started making feature films, which were few and far in between, but it were those films that made him one of the greatest film talents in history. Chaplin made five feature films in the 20s, and just seven after that. The feature films directed by him are:

All the ten films made between 1921 and and 1952, each one of them, features in TSPDT's list of 1000 Greatest Films Ever Made. After Stanley Kubrick, he is the only filmmaker with such a consistent record and unparalleled quality. This post of mine, in a futile attempt to measure his genius through numbers and data, has been reduced to a statistical glimpse of the master. But I was so fascinated by this entire information that I had to share it here. I would try to write a more insightful post later. For the moment, let me end with these words by Sir Charlie Chaplin himself:

"I remain just one thing, and one thing only, and that is a clown. It places me on a far higher plane than any politician."

By the time the world got engaged in another unfortunate war, in 1939, that young man had grown to a gigantic stature in popular culture. As Hitler prepared for World War II, Chaplin was making a film on the dictator. What happened when the two ideas collided? To be continued...

Posted by satyanshu singh at 2:41 AM