Getting Cinemate: The Three-Act Paradigm (Illustration) 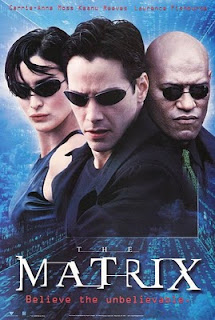 Let us discuss the three-act paradigm with the example of Larry and Andy Wachowski’s The Matrix (1999). The plot can be outlined as: “A computer hacker learns about the true nature of his reality, and that life on Earth may be just an elaborate facade created by a malevolent cyber-intelligence - the Matrix, for placating us while our life essence is "farmed" to fuel its campaign of domination in the "real" world. He joins a group of rebels in their struggle to overthrow the Matrix.” (courtesy IMDB)

The Principal Characters and their respective Dramatic Needs are:

Act I (page 1 to 29): Setting up of the dramatic premise and introduction of the main characters, esp. the strange and mysterious world of Neo. We do not understand too many things at this stage, but are constantly hooked to this thrilling cat-and-mouse game. The last part of this Act is Neo’s first meeting with Morpheus. Neo takes the red pill and decides to join Morpheus. This event is clearly the Plot Point I – leading the story into the next act.

Act II (page 29 to 92): This Act poses obstacles in the dramatic journey of our protagonist. Neo would not realize himself too easily- there are battles, within and without to be fought. This Act can be divided into two halves.

Act III (page 92 to 120): Neo and Trinity manage to save Morpheus, but Neo is trapped. An elaborate fight sequence follows. Finally, when Smith has almost killed him, Neo ‘realizes’ and returns back successfully.

The entire screenplay is Neo’s journey. His need to know what is wrong with him begins the journey, Morpheus’ need to find the ‘One’ propels it and Trinity’s love culminates it. Neo begins as a passive, confused, reluctant protagonist, but both Plot Points and the End are made possible only by his active action – eventually making him the all-powerful. By the end, Trinity and Morpheus, who once looked stronger than Neo, are limited to play supporting roles. Agent Smith fails in his attempts. The film ends with Neo’s declaration that he has ‘decided to make a few changes’ and then he ‘flies faster than a speeding bullet.’

It is indeed amazing that a film that is so visual and technically advanced has, at its core, a story well-written – words on paper, following the classical paradigm of storytelling, with the Acts and Plot Points at mathematically exact positions. Cinema, definitely, is as much a craft, as an art.

Posted by satyanshu singh at 12:35 AM