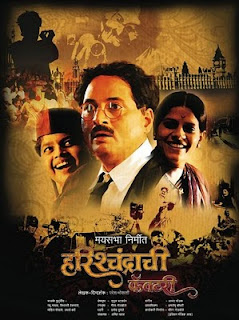 Post ‘Shwaas’, the Marathi film industry has undergone a revolution and a significant number of filmmakers have emerged, telling wonderful stories in simplest but effective ways. As my producer says, “It is a wonder how they manage to make such beautiful films with little resources. These Marathi guys, they know the fuck they are doing!”

‘Knowing the fuck you are doing’ is not an easy thing. Watch ‘Harishchandrachi Factory’ and you’ll know. The film tells two similar stories. The main story is about a simple man with the heart to follow his dream, who gave India its first motion picture, kick-starting a movement that has turned into the most prolific film industry in the world. Today we remember him as Dadasaheb Phalke, after whom the highest cinema honour in this country is named. He had nothing when he was struck by this dream of film-making – not even the basic technical know-how. But he learnt, and he invested all he had, and he endured the disparaging remarks of the people around him. He was a Howard Roark with a smile. And his ‘Raja Harishchandra’ was indeed the fountainhead of Indian cinema.

The second story is not what the film tries to tell, but the film itself. The writer-director was inspired to tell the story of Phalke. And he does that, simply, and effectively, and again, with a smile. It doesn’t try to sound profound or motivational; neither does it even slightly try to exalt its protagonist. Instead, it takes a funny, entertaining course. It doesn’t try too hard to affect you, but it does so by being itself. Simply written, simply shot – you will be amazed by the impact some of the scenes shot purely in master shots have on you. Paresh Mokashi’s work is something that even the Grand Old Man of Indian cinema would have been proud of. Good filmmakers do not worry about what resources they can not afford, about things they can’t control. But they know what it takes to make a good film, and have the heart to do so, as evident in a scene from the movie:
The cinematographer (asks Phalke while shooting an outdoor sequence): “What about those jackfruit trees?”
Phalke: Didn’t they have jackfruit trees in those days (during the days of Raja Harishchandra)?
Cinematographer (wonders): Jackfruit?
Phalke (insists): It is the story that is important.

It is this uninhibited art of storytelling and the love for the medium that has resulted in the cinema of today – cinema that we all love. And then it really pains me when I get to know the work culture of Mumbai film industry. The more my brother and I are discovering the way they make films here, the more we are filled with disgust. And we feel pity for poor cinema that they treat like a whore. They use it to fulfill all their sensual pursuits and hardly care for the art, or the lack of it, that is resulting in some truly embarrassing works. When Phalke tried to get some female actors for his film, even the prostitutes refused to do this ‘lowly’ job. He and all other great visionaries after him made sure that the art of motion picture gained the stature it deserved, so much so that it would be difficult for anyone to decline a film offer these days. Sadly, most having reached there do everything but taking care of the cinema they are making. It is Hindi cinema that is blamed for being mediocre, when it should be these self-proclaimed ‘filmmakers’ who are the real sinners. Oh, my darling, I wish I could do something for you!
Posted by satyanshu singh at 11:52 AM