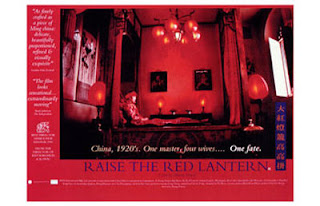 Zhang Yimou’s ‘Raise the Red Lantern’ is set in China, in the year 1920. It tells the story of a young girl who becomes the fourth wife of a wealthy man and finds herself caught in the game of winning that disgusting, good-for-nothing chauvinist from other ‘sisters’.

Why is this movie a must watch?
• Because it is a bold and brutal critique of our society that has traditionally been making rules to suit the polygamous and perverse nature of the male. At the same time it displays an interesting game of sexual politics by women who know how to make use of the male’s weaknesses.
• Because it is immensely erotic and haunting, without being either. There is a gutsy aesthetic decision made by the director by hardly revealing to us the face of the husband – as if it is a shame, as if it is irrelevant, though we are allowed complete access to the expressions, the emotions, and the inner lives of most of the wives.
• Because it is always wonderful to witness something so unique, so local in its socio-cultural expression, so universal in its aesthetic appeal. From the customs, to the music, to the costumes – it is an amazing cultural journey into one of the world’s oldest and richest civilizations.
• Because it is one of those rare films where the location is as important as the plot or the characters. You can not forget the imposing castle that contains all of the film and might even feel like taking a trip to China just for visiting that place.
• Because this film proves how a good director can take the script and re-write it on celluloid, making it rise to a level so supreme that is beyond words written on pages.

Film Critic James Berardinelli says, talking about its opulent visuals, “The appeal to the eye only heightens the movie's emotional power." He rated this film as the 7th best film of the decade.
Posted by satyanshu singh at 10:47 PM