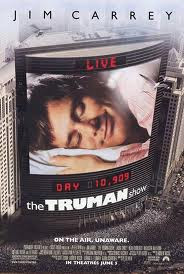 A couple of days ago I finished studying Nicholas Proferes’ shot-by-shot discussion of Peter Weir’s ‘The Truman Show’. In his excellent book ‘Film Directing Fundamentals’ he studies the craft of three movies, the other two being Hitchcock’s ‘Notorious’ and Fellini’s ‘8 ½‘. While I was aware of the greatness of these two masterpieces, I wondered, before watching ‘Truman’, why Proferes has chosen this movie among the two great ones. I wonder no more.


Why ‘The Truman Show’ is a must-watch-before-you-die movie?
• Because ‘How the hell they came up with this idea!’ is the universal exclamation the audience has on watching this film. You talk about innovative story ideas? After watching this film, it will be the benchmark to evaluate that. Also, twelve years after its release, it now has indeed acquired a prophetic status, with our private lives actually being chased by the phenomenon of reality television.
• Because this story can only be told through the medium of cinema. Movies like these establish the importance and uniqueness of cinema among other forms of art and expression. ‘The Truman Show’ is a triumph of the power of cinema, something that would make its founding fathers smile in their graves.
• Because it is universal in its emotional appeal and entertainment. No one can stay unaffected by the wonderful journey of Truman, beyond cultures, languages, and even tastes. This film again proves that when it comes to pure entertainment, nobody does it better than Hollywood.
• Because Jim Carrey is Jim Carrey. And in this film he is more than that. He is Truman. I have watched its dramatic scenes so many times already, and with a very mathematical eye at the camera movement and the edit pattern and all. And in spite of that, Carrey’s performance makes me truly emotional. The climax is devastating and uplifting at the same time.
• Because you can not help but think about the philosophical undertone of this film – the world is an illusion, a make-believe trap for us, controlled by a mastermind, who loves us, but is cruel at the same time, who exists because of the world he has created, and the world exists because we allow ourselves to be trapped in the illusion. As Christof, the Creator of the Show says about Truman: “He could leave it anytime, if his was more than just a vague ambition. If he was absolutely determined to discover the truth, there is no way we could prevent him... ultimately, Truman prefers his cell.”

If you haven’t watched this movie, you are definitely missing something wonderful.
Posted by satyanshu singh at 11:28 PM

Labels: Hollywood and Around, Must Watch Before You Die