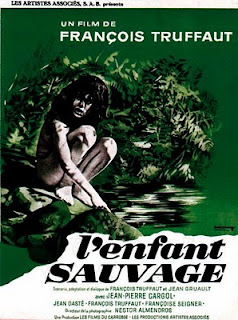 Watched Francois Truffaut’s ‘The Wild Child’ yesterday. And it inspired me to start a new series of posts on this blog. I would be recommending movies in this series that must be watched if you love cinema. A movie can be anywhere on the spectrum of poor to brilliant. And a ‘must watch’ movie need not be among the most brilliant ones. Let me make it absolutely clear that I would not suggest movies on the basis of their merit or their quality, but depending on a simple fact: If you don’t watch this movie, you are going to miss something truly unique. For example, I would recommend ‘Let’s Talk’ over superior films like ‘Maqbool’.

Also, there are certain expressions possible only through the medium of cinema. I would try to recommend those movies. ‘Amelie’ is a must watch for the same reason.

‘The Wild Child’ is based on a true story – about a beast-boy discovered in some jungle in France, and how a doctor dedicatedly works to ‘civilize’ him. Why is this film a must watch?
• Because it is a great study into the mental development of man over other species, illustrating the unique achievement of certain inherent traits in us that we hardly seem to notice. This film can actually arouse in you an interest in the psychological evolution of man.
• Because it doesn’t take sides and still triggers a discussion, a paradoxical debate in your head, about the importance or the futility of ‘civilizing’ someone by robbing him of his natural habitat. This balance, this ambivalence of the film is a rare achievement.
• Because the way Truffaut directs his actors (including himself as the Doctor) makes you seriously doubt whether a better film would be possible with a similar story.
• Because you do not want to blink and miss a moment during the entire length of the training sequences – you see the child being civilized and learned, and you smile at his achievements, but can still feel the loss of that wild ignorance, as if it were a desirable virtue.
• And finally, and this is going to be my strongest reason for many ‘must watch’ films – because you just don’t want this film to end.

P.S. I will try not to go through the list of movies I have already watched, because then there will be no end to this exercise. Instead, I will come up with these recommendations only when a new movie blesses me and I’m dying to make you watch that.
Posted by satyanshu singh at 1:07 PM