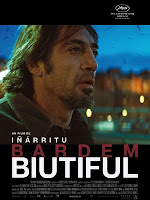 Nagisa Oshima is one of the pioneers of Japanese New Wave. And the first thing I noticed in his film, 'The Sun's Burial'(1960), was the highly saturated shades of primary colours, reminding me of Godard's 'Pierrot le fou'. 'The Sun's Burial' is a view into the criminal lives of slum dwellers in Osaka.

Yojiro Takita's 'Departures'(2008), that won the Foreign Film Oscar last year, is one film you would find difficult to forget. Introducing us to the traditional Japanese custom of preparing the dead for cremation or burial, the film truly, as the festival catalogue says, was 'a moving celebration of life in midst of corpses and coffins'. Whether it was better than 'The White Ribbon' is a question I need time to answer. And that is a beautiful situation to be in.

First-timer Natalia Smirnoff's 'Puzzle'(2010) was a sweet surprise. The story of a middle-aged Argentinian woman's discovery of a passion for solving jig-saw puzzles left me wondering - why there is such a huge difference between the first-time directors in our country and those abroad. I wish some Indian filmmaker could make a film as good as this.

Another first-film, that was awarded the Best Debut at Berlin this year, Babak Najafi's Swedish movie 'Sebbe'(2010), was extremely well-made. But the writing left me unsatisfied. The story of a mother-son bond amidst conflicts within and around left me wanting for more.

But the best of the day, and till now of the festival, turned out to be the film I had most eagerly awaited. Thanks to the organizers, they screened it again tonight after yesterday's mad rush and disappointed faces. Alejandro Gonzalez Inarritu's 'Biuitiful'(2010) does not have the structural complexity of his earlier films - 'Amores Perros', '21 Grams' or 'Babel', but it is way more complicated and layered. The story of Uxbal, brillinatly portrayed, as ever, by Javier Bardem, is almost straightforward in narration, but the way it explores the protagonists' character, it leaves you grieved and elated at the same time. It is as if the master has overcome his wonderful fascination with screenplay structure, and has moved to a higher level of artistic maturity, something not many can achieve. For creating something like 'Biutiful', you need to be a genius. With this film the filmmaker affirms his position as the one the living greats in world cinema.
Posted by satyanshu singh at 11:12 AM