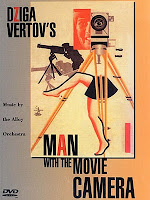 Artists who are intellectually and aesthetically more advanced than their contemporaries are called the Avant-Garde (literally ‘the vanguards’), pioneers contributing in the evolution of the art. For all those who knew this term, and for those who came to know while reading these words, here is a movie that best defines it. Dziga Vertov’s silent experimental film called ‘The Man with a Movie Camera’ (1929) is, and will remain, one of the most mind-blowing experiences of motion picture.

Why is it a must watch?
• Because its opening titles daringly read: “Excerpts from a camera operator’s diary… This film is an experiment in cinematic communication of visual phenomena, without the use of intertitles, script, actors, and sets… Aims at creating a truly international language of cinema based on its absolute separation from the language of theatre and literature.”
• Because it does succeed in communicating cinematically the passion of a man with a movie camera, the fascinating patterns in the everyday world around us, and the power of film to entertain, and go beyond it. It also argues for the case of filmmaking – that it is a kind of occupation with complicated technique and long-hours of patience and devotion. Of course, what it ‘communicates’ to you would depend on how you look at it.
• Because it might be the first film to have attempted to show filmmaking itself. It shows a man going around with a movie camera and shooting. It shows a woman working patiently in the edit room. And it shows the final product being screened for the audience. Also, the movie being screened also shows the cameraman. So, it shows the screening of itself!
• Because I doubt you are ever going to find a film that contains so many technical innovations in one: Parallel Montage, Match Dissolve, Freeze Frame, POV Shots, Fast and Slow Motions, Jump Cuts, Stop-Block, Split Screens, Dutch Angles, and the earliest Spl Fx. All of these were not strictly ‘innovated’ in this film, but I have never seen something technically and historically as important as this.
• Because it is the father of all cinema rebellions and revolutions, celebrating the power of motion picture by simply playing with images, and entertaining and stunning us, without any story or performances. Just different rates of frames per second. Just film – shot, cut, projected.

As Vertov said, “My path leads to the creation of a fresh perception of the world I decipher in a new way, a world unknown to you.” That perception is the magic a filmmaker weaves through the make-believe of cinema!
Posted by satyanshu singh at 11:49 PM