The Woman and the Man from the Old South 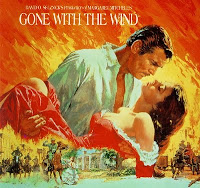 I have had a copy of ‘Gone with the Wind’ for close to four years, but never dared watching it. The only reason was its daunting four-hour running time. A couple of days ago, on my 30-hour train journey, I watched five films, the first being this Victor Fleming historical. I feel relieved – as if a long-pending job is over. And I feel fulfilled – an unforgettable cinematic epic is now a part of my consciousness.

Adjusted for inflation, ‘Gone with the Wind’ would be the highest grossing film in the history of cinema. It played in certain theatres for more than 3-4 years. It is certainly as magnificent as a movie can be. It is also one of those rare instances where the film is believed to have done justice to its literary source, though I must confess that I haven’t read the Margaret Mitchell novel. In fact, I’m not sure whether I would ever read it. And that brings me to the biggest sense of fulfillment on watching the film.

The real triumph of the story of ‘Gone with the Wind’ is its two main characters – Scarlett O’Hara and Rhett Butler. Although she might very well have been the heroine of an immortal Shakespearean tragedy, a protagonist as flawed as Scarlett is rare in cinema. I don’t think I’m wrong to believe that she is the most selfish and conceited of all characters in the story. And thus she attracts, unintentionally so, Rhett Butler, the compulsive non-committal philanderer, believing in his own morality and giving a damn to the world. There is nothing conventionally likeable about the two except, may be, their good-looks. Apparently, it is difficult to understand how a story with primary characters as corrupt as these secured such an insane amount of funding to be made into a film during the era dominated by the conventional studio mind-set. But the monumental success and popularity of the film proves that the audience related to them. This time, they did not worship the hero and the heroine for being superhumans of great character, valour, or beauty, but they empathized with the lead pair for being what they were – opportunistic, and self-centered. The audience loved the unapologetic characters because they were everything a man-animal (or a woman-animal) would secretly like to be, and they expressed something the society does not let us express. In fact, this very reason makes Scarlett and Rhett immortal and evergreen; they are as valid today as they ever were. Any story, based anywhere in the world, with these two as the lead pair would always be fascinating and more true than others involving more idealistic or romantic characters. I do not know whether I will have the patience to read the epic in its original form, but thanks to cinema, I will never forget this story of the Old South, and the woman and the man I could so relate to – two of the most lovable anti-heroes we will ever see.
Posted by satyanshu singh at 2:53 PM