The Cinematography of 'Citizen Kane'

"There's only one person in the world to decide what I'll do. And that's me."
Film scholars and historians view ‘Citizen Kane’ as Welles' attempt to create a new style by studying various forms of movie making, and combining them all into one, though Welles himself denies that. He believes it was his ignorance that led him to those technical innovations, all of which were not essentially pioneered by this movie but eventually became inseparably associated with it. The director here does not indulge in taking stand on the Realism versus Expressionism debate, but rather uses the best of both schools in order to create his cinema. We will discuss this with respect to the cinematography of ‘Citizen Kane’. 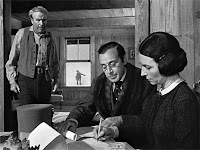 Observe this snapshot from the scene at the Colorado home. It might be difficult to appreciate it here, but in this shot all characters are in focus – including the kid Kane playing outside (he may appear out of focus, but it’s actually snow). This kind of photography is called Deep Focus, where the depth of field is enhanced and a lot of things appear to be in focus together. How is this achieved technically – I don’t know. Some of my photographer friends can help me understand. But Deep Focus photography in cinema has now become synonymous with ‘Citizen Kane’. We read this technique as being ‘realist’ – since everything is in focus the audience can choose what to focus on without the director ‘directing’ their attention to something in particular.

The shot on the left is also an example of Deep Focus photography.

Any time Deep Focus was not possible, and I guess it has something to do with the availability of light (though I may be wrong), the makers employed other tricks to create the deep focus effect. 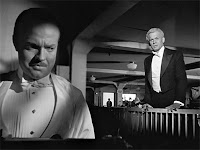 In this shot, Kane is in foreground and his friend Leland is at a considerable distance. Yet both appear to be in focus. This was achieved by shooting the two separately and then visually layering the films together using an optical printer. 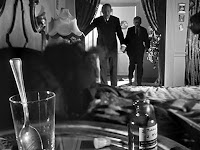 However, notice that in this shot after Susan’s suicide attempt, the imposing bottle and glass in the foreground as well as the men entering the room are in focus, while Susan herself is out-of-focus. This was achieved using in-camera effects. The foreground was shot first, with the background dark. Then the background was lit, the foreground darkened, the film rewound, and the scene re-shot with the background action. Of course, this choice of focus enables a crisp storytelling where no dialogue is required to explain what happened. The unconscious woman in soft-focus definitely enhances our perception of her delirious state. And focusing on her husband, and our protagonist, makes sure that this remains as much his scene as it is of the wife.

And then we move to the most expressionistic camerawork that this movie employs. This extreme low-angle shot is so different from our perception of reality. More such bizarre angles and lenses were used at various points in the movie. Here the director is producing his own version of reality. Welles had to create ceilings over the sets and dig the floors to create trenches that could accommodate the camera. In those days, all of this was unheard of. Why does he do that? May be it was a stylistic choice, but here is how the famous French critic Bazin reads this shot: “the gaze upward seems to come out of the earth, while the ceilings, forbidding any escape within the décor, complete the fatality of this curse. Kane’s lust for power crushes us, but is itself crushed by the décor. Through the camera, we are capable in a way of perceiving Kane’s failure at the same time we experience his power.”

This is only a glimpse into the bag of tricks that this movie is. You can watch the film again and again just for its cinematography, the importance of which can be assessed by the way Welles credited his cinematographer. There is no separate title card for Welles as the director. He shares it with the cinematographer! I have never seen something like this elsewhere.
Posted by satyanshu singh at 11:59 PM

Labels: Citizen Kane, Hollywood and Around, Reading Film, Talking About the Masters