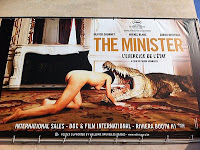 About half a dozen strangely masked humans carry on with some incomprehensible ritualistic march, till a frankly naked woman walks down the hall. She reaches an intimidating crocodile, live and menacing, waiting for her in the corner of the room. The woman looks pretty sure of herself as she faces the crocodile that then opens its mouth. Without any hesitation the woman crawls into the crocodile's mouth, and MAMI 2011 begins.

Watched four movies today, all latest offerings from world cinema. 'The Turin Horse' could have been the fifth, if the technical problems with its projection could have been sorted. Going by what I saw, it could have been the movie of the day. Hopefully they will organize its screening tomorrow and then I'll feel better. At this moment, however, I'm not feeling contented, and it's only because I could not finish this movie.

But otherwise the movies were very good. This year's Camera d'or winner at Cannes - 'Las Acacias' that told the quietly moving story of a truck driver who is taking a woman and a baby from Paraguay to Buenos Aires, was loved unanimously by the audience. The director Pablo Giorgelli was glad to present his film for the Mumbai audience and we were pleased to attend his brief Q&A after the movie.

The German movie 'Die Ausbildung' ('The Education') told the story of a young boy training at a customer care center and the people around him. I liked it for how the movie gave a glimpse of the ruthless corporate culture through a simple story. At the same time 'Pather Panchali' was being screened in the next screen. Watching it on big screen again (had watched it for the first time at AFMC Med Cine festival) was a tempting proposition and I'm not sure whether I truly not regret my decision!

'Above us only Sky' reminded me partly of Kieslowski's 'Blue', because of the situation faced by the leading lady, but mainly of Antonioni's 'L'avventura'. The film begins with a story of relationships that suddenly turns into an inexplicable mystery-thriller. But eventually, the story neglects the 'mystery' altogether and culminates as a strange and unexpected love story. The reaction by the audience was lukewarm, especially near the baffling end of the movie, but I truly loved it. Sandra Huller, playing the protagonist, is my pick for the 'performance of the day'. And the movie too was perhaps the best among the four. Perhaps, because one strong contender was the French political drama - 'The Minister'.

Watching the scene mentioned in the beginning of the post I was stunned, and excited. The movie turned out to be completely different from its opening scene, but it left me so satisfied. It was so well written, so well executed. Modern world cinema at its powerful best - that is 'The Minister'.

Excited about tomorrow - going by the schedule, it can be the best day of the festival...

Posted by satyanshu singh at 11:49 PM