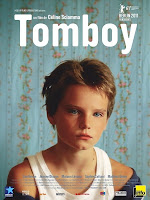 I had high expectations from ‘Restless’, since it is a Gus Van Sant film. It’s always interesting to see him attempt different genres, and this time it was a warm and funny reflection on death. I especially liked the end of the movie.

‘Tomboy’ generated a huge applause from the audience. This is the kind of movie you instantly fall in love with. I also appreciated how an intense and difficult topic like this was treated so interestingly. This film festival was full of films featuring children, and ‘Tomboy’ featured some of the best.

My closing film was ‘Once Upon a Time in Anatolia’. I found it difficult, but it was obviously good. I mean, I could understand that it has something, but couldn’t determine that something. This and ‘Sleeping Sickness’ will be two movies I would like to watch again and read about in order to appreciate better.

My final score was 28 in seven days. I’m not at all satisfied with myself. And now I can only hope of bettering it the next year.
Posted by satyanshu singh at 10:22 PM