I had a conversation with the writer and the director of the latest release ‘Agneepath’. True to my nature, I did the most of talking. Following are the excerpts:
(As I came out of Chandan Theatre, with thousands of others, the Writer spotted me. He was coming out of the next-door PVR.)

The Writer: Hey Satyanshu! How did you like the film? I really want to know your reaction.

Me: Well… I’ll get to that later. But first I’ve some questions for you.

The Writer: Go on!

Me: You took a long time to justify why a young Vijay decides to make ‘revenge’ his life’s sole ambition, the entire story until we see the first glimpse of his grown-up self is about that, and I was pretty involved during that part. So I must say the film began well for me.

The Writer: Oh, thank you! 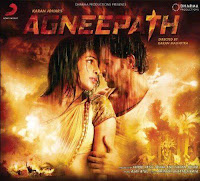 Me: Wait… hold on… I’m not complimenting you… Anyway, let me first ask you those questions. At the interval point I realized that Vijay had spent most of our film time plotting and acting against his father-figure Rauf Lala. Why did he do that? Was eliminating Lala the only way for Vijay to reach Kancha? I don’t believe that! We were prepared to watch him avenge his father’s death and here he was, busy needlessly, with Lala. The final clash with Lala was justified as Lala was ‘selling’ Vijay’s kid sister, but Lala did that to avenge the death of his son, and I would say he was justified in doing so. Don’t you think Vijay lost his focus for the most part of the film and his incoherence confused the audience?

The Writer: No one has been complaining that!

Me: Yeah, I agree. They are too confused to pin-point this major personality flaw in Vijay, the hero who confused his vengeance. And there are more questions… See. Vijay went to fight Kancha alone, right? With neither his army of eunuchs, nor with Om Puri’s police force, nor with the goons he had stolen from Rauf Lala. He went alone, almost empty handed, right? So why did he wait all these years? And, this brings me back to my first question, why did he work tirelessly to eliminate Lala? Was it because he could not find proper means of transport to go back to his village all these years? Why did he keep waiting? We would have cheered his incredible single-handed victory over Kancha anyway, didn’t he know that? Was he waiting to build enough muscles to be able to life the giant Kancha at the most vulnerable point of the duel? Or was he waiting for the film to approach its third hour of run time?

The Writer: Have you watched the original?

The Writer: I’m talking about the original ‘Agneepath’. Have you watched it?

The Writer: Watch it. Then we will talk.

(Interrupted by the entry of the Director)

The Director: But I’m the writer as well.

The Director: Don’t you see? You’ve been talking with me about the script for so long now!

(And I quietly slip away.)
Posted by satyanshu singh at 11:44 PM