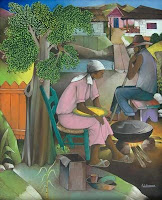 I’m the happiest person on earth these days. And I’m the saddest. The reason for both is a wonderful experience I’m having, and for a change, it has nothing to do with cinema. The name of that experience is “One Hundred Years of Solitude”, one of the most amazingly original piece of fiction, more infectious and influential than anything I have read. The author, Gabriel Garcia Marquez, is my latest God.
I have wanted to talk about him and this novel on this blog ever since I started reading it. But since I had restricted myself from discussing anything except cinema on this space, I could not. Then Marquez himself came to my rescue. The twelfth chapter of the book began with following lines and I instantly got the ‘excuse’ to share it here.
[The eleventh chapter ends with the first locomotive arriving in the isolated town of Macondo: “…the innocent yellow train that was to bring so many ambiguities and certainties, so many pleasant and unpleasant moments, so many changes, calamities, and feelings of nostalgia to Macondo.” Following is the opening passage of the twelfth chapter]
“Dazzled by so many and such marvelous inventions, the people of Macondo did not know where their amazement began. They stayed up all night looking at the pale electric bulbs fed by the plant that Aureliano Triste had brought back when the train made its second trip, and it took time and effort for them to grow accustomed to its obsessive toom-toom. They became indignant over the living images that the prosperous merchant Bruno Crespi projected in the theater with the lion-head ticket windows, for a character who had died and was buried in one film and for whose misfortune tears of affliction had been shed would reappear alive and transformed into an Arab in the next one. The audience, who paid two cents apiece to share the difficulties of the actors, would not tolerate that outlandish fraud and they broke up the seats. The mayor, at the urging of Bruno Crespi, explained in a proclamation that the cinema was a machine of illusions that did not merit the emotional outbursts of the audience. With that discouraging explanation many felt that they had been the victims of some new and showy gypsy business and they decided not to return to the movies, considering that they already had too many troubles of their own to weep over the acted-out misfortune of imaginary beings.”
So cinema flopped, failed to impress the people of this magical land. I didn’t mind, just thanked Marques sa’ab for weaving it in his work about which book-reviewer William Kennedy writes: “the first piece of literature since the Book of Genesis that should be required reading for the entire human race… Mr. Garcia Marquez has done nothing less than to create in the reader a sense of all that is profound, meaningful, and meaningless in life.”
So after completing seventy per cent of it, I’m sad. Some of the most endearing characters are dying in solitude, and the novel is about to end. But I find myself agreeing entirely with the above-mentioned book-reviewer, and want my Mom to read this urgently, and am looking for a Hindi translation of the book for her. This is the funniest and the saddest story I have ever read. And I believe, anyone who ends up reading this book will find his way of looking at the world change forever – by being magically aware of its beauty and sordidness, merits and futility, all at the same time.
P.S. By the way, cinema did not perish from Macondo. Later in the novel there is mention of people spending time at the movie theatre. “Then she got dressed, went to the movie theater, and in the darkness of the seats she recognized her daughter. The upsetting feeling of certainty stopped her from seeing the man she was kissing, but she managed to hear his tremulous voice in the midst of the deafening shouts and laughter from the audience.”
(image courtesy: http://thegourmetdilettante.blogspot.in/)
Posted by satyanshu singh at 12:25 PM