How to Produce Smart and Successful Sperms 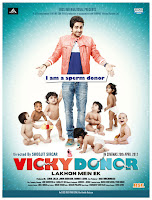 Step 1 – Conception: The writer gets pregnant (in the head) with an idea that is novel, exciting, and promising. Preferably, that idea should be modern – something that was impossible to imagine during the 90s or before. Go for taboo topics if you feel the courage.

Step 2 – Incubation: A lot of blood and sweat is invested to write the script over the next few (read many) months. The best mantra will be (as suggested by Bergman or Wilder or both, I don’t really remember) – you shall entertain, and you shall not sell your soul.

Step 3 – Selection: The director casts the best actors possible for each role, big or small. (Casting, according to Kurosawa, is the most important step in film-making, after writing). Well-written characters will always inspire the actors to do their best, often at a low-cost.

Step 4 – Production: An intelligent and caring producer takes on the project and provides love and support to the team, led effectively by the director. One important tip here is – do not compromise on production value. Negotiate with your talent to cut their costs but not with what shows on screen – the sets, the costumes, the overall look of the film. And yes, there are two words that matter most here – conviction and honesty.

Step 5 – Promotion: Here, the concept that kick-started the writing process will come handy again. A modern and promising idea can create curiosity in the mind of the audience. One section might take this ‘high concept’ as a gimmick, but it will generally work, esp. if it has a sexual connotation. Having a star do an item number for promoting the film is also a good idea. If the star is producing the film, you save a lot of money there as well.

Step 6 – Ejaculation: As always, the timing of release is essential for good performance. “IPL is bad for film business” is a myth. A smart sperm will find one Friday during IPL when no ‘biggy’ is being released and with good reviews and word of mouth will penetrate the tough shell of the ovum waiting for it (read “poor audience, poor both money-wise and helplessness-wise, starving for good entertainment”).

P.S. We badly need such smart sperms, at least once every month. The millions others are too weak to survive in the competition and the cinema consciousness of the audience, and as a result go waste. We call upon the filmmakers for such 'sperm donation' to bring joy in the barren lives of the movie-goers, frustrated with the infertile Hindi cinema of today. Vicky made a few thousand bucks per 'donation'. We promise you crores of them. Just check the latest trade reports.
Posted by satyanshu singh at 12:04 AM