Two years ago I had had my first 'Venice in Andheri Film Festival'. This year I decided to have a second edition and take it more seriously. As the Award Ceremony at the 70th Venice Film Festival was taking place last evening, I was watching the Closing Film of my very own festival, the fourteenth I watched in the last few weeks. These fourteen films have been award winners in different sections in the history of Venice - the oldest film festival globally. What started as a fun exercise, soon became an obsession and the cinema experience I have had in the last few days has truly been something you experience only at festivals, where films from different cultures and times, some by great film-makers you know, and some new discoveries, make your life more beautiful than ever and your faith and belief as a film-buff is rejuvenated, seriously rejuvenated. I do not remember when I last pampered myself this much. In fact, the experience has been so amazing that I am seriously considering indulging in a 'Toronto in Andheri Film Festival' as the actual Toronto film festival is being held as I type these words.

Following are the movies that I watched as part of my personal festival. Almost all of these are available on the YouTube, and I have embedded their respective links with their titles:

Opening Film: Rocco and his Brothers (Special Jury Prize 1960/ Italy/ Luchino Visconti) One of the best dramas you are ever going to watch, this Visconti classic moves you so deeply, and provides you emotional fulfilment at so many levels that, like me, you might just exclaim to a dear friend saying something like: "My life just got richer today! What a movie I watched!!"

The Wind will Carry Us (Special Jury Prize 1999/ Iran/ Abbas Kiarostami) Only Kiarostami can make a film like this. Impossibly real in its performances, milieu, and aesthetic, and deeply profound in its study of human minds and cultures, the film may take time to grow, but by the end you are so convinced of its great merits.

White Nights (Silver Lion for Second Best Film 1957/ Italy/ Luchino Visconti) Based on the story by Fyodor Dostoyevski, this film features the most famous Italian actor I have known - Marcello Mastroianni. The sets of this film are uncannily similar to the Bhansali film on the same story, while the effect is a lot more.

J'entends plus la guitare (Silver Lion for Second Best Film 1991/ France/ Philippe Garrel) The title of this film roughly translates to "I can no longer hear the guitar". The film is not about music, and I don't remember spotting any guitar. Instead it is a semi-autobiographical tale of love and loss and a stuff exclusively of the film festivals.

Still Life (Golden Lion for Best Film 2006/ China/ Jia Zhangke) It is always a delight to watch great films from modern world cinema. And the cinema of China and South-East Asia has suddenly created a reputation in the last two decades. Zhangke for me was a discovery. And the setting of this film unforgettable. It is the kind of film you wish you made.

The Magician (Special Jury Prize 1958/ Sweden/ Ingmar Bergman) The "lesser" films of masters is, at times, a pleasant surprise. This Bergman film was one. Add to this the delight to watch those familiar faces performing once again, faces you associate only with one film culture (Swedish, in this case), and at times, with one film-maker.

Black Cat, White Cat (Silver Lion for Best Director 1998/ Yugoslavia/ Emir Kusturica) Perhaps the most popular film of the list among young film-buffs of today, this is exactly what you would expect from Kusturica. I could have watched it long ago; guess it had to happen now.

They Don't Wear Black Tie (Special Jury Prize 1981/ Brazil/ Leon Hirszman) Unless you have a film from Latin America or Africa, your festival experience can not be complete. The familiar face of Fernanda Montenegro ('Central Station', 1998) was a delight. And the film one of the best relationship-dramas made on a political premise.

Redacted (Silver Lion for Best Director 2007/ USA/ Brian De Palma) A Brian De Palma movie that did not receive widespread release in the US because of its controversial content - is a good enough reason to watch this Iraq War-based film. Watch it on YouTube today.

Vive L'Amour (Golden Lion for Best Film 1994/ Taiwan/ Tsai Ming-liang) Another discovery. And one of the most unforgettable films of the list. Without the use of substantial dialogue, it is remarkable how this film holds your attention and doesn't leave you until it reaches a deeply moving emotional catharsis. The writer-director is the winner of this year's Grand Jury Prize for his latest work - 'Jiaoyou'.

Little Fugitive (Silver Lion for Best Film* 1953/ USA/ Ray Ashley, Morris Engel, Ruth Orkin) One of the early independent American films, featuring non-actors and a hand-held camera, this film rightly influenced the French New Wave masters. You would want to make a short-film on this story if I told you what it is. Watch it with your family. (* That year no Golden Lion was awarded. Six films were adjudged Best Film and Silver Lion was given to each.)

The Magdalene Sisters (Golden Lion for Best Film 2002/ Ireland/ Peter Mullan) Films which dare to raise voice regarding religious absurdities and malpractices always find their way into any film festival I attend. The topic is such, you can't escape it. And hence this film remains relevant and superbly engaging. 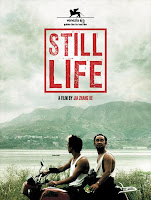 Vagabond (Golden Lion for Best Film 1985/ France/ Agnes Varda) A very interesting film that retraces the last few days of a dead vagabond girl, with characters often speaking to the camera, this strongly feminist film is very much a New Wave work made several years after the revolution was over.

Closing Film: Ordet (Golden Lion for Best Film 1955/ Denmark/ Carl Dreyer) Arguably the greatest film of the list, and a regular feature in several "Great Movies" lists, this modern spiritual fable closed my festival on a high note, especially with its last ten minutes that have become unforgettable in cinema consciousness.

As I watched my closing film, the Breaking News reached me. Indian short film 'Kush' had won the Orrizonti Award for Best Short Film last evening. Watch its trailer here and look out for this film-maker.

Posted by satyanshu singh at 8:57 PM