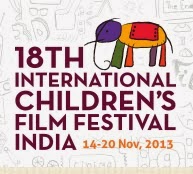 Last month, Devanshu and I enjoyed, perhaps for the first time, the perks of being film-makers, during the first film festival we attended as participants in competition, rather than delegates or film-buffs. The event, International Children's Film Festival, was held in Hyderabad where our film, Tamaash, was competing with 15 others in the International Shorts Competition. To be honest, we had no idea how wonderful the experience could be, until we reached there.

Okay. So, I haven't travelled much by air - only thrice before this. The festival organisers took care of our air fare and hence I got the chance, once again, to feel the excitement of being hundreds of metres above the ground, silently revising the concepts of physics - relative velocity, frame of reference, etc - that we had learnt in school, and marvelling at the achievement of man. On reaching Hyderabad airport, we received a traditional welcome with flower garlands from the festival volunteers that left us amused and awkward at the same time with everyone in the airport looking at us. Then a car took us to the hotel we were supposed to stay in for the next eight days. To add to this, my Mom joined us that evening, and for both her and me it was our first stay at a five-star hotel. Our meals were taken care of, and we were provided with vehicles to travel from the hotel to the festival venue and back. Interacting with film-makers from abroad, with the audience during the screening of our film, and with the media followed. Personally speaking, the biggest highlights of the trip were to make Mom meet Gulzar Sahab and Amol Palekar, visiting Ramoji Film City and other places of interest in Hyderabad, and having a one-hour informal lunch meeting with Raju Hirani. This last meeting was amazing, with Raju wanting to hear from me my poems from 'Udaan' and we talking about his approach towards writing and editing his films. I'm sure Mom will cherish that forever. And then, on the last evening, our film won an award, as I have mentioned in a previous post. The most beautiful thing about it, of course, was that it happened before my mother. As if this was not enough, soon after this trip ended, our film won the Audience Award for Best Short Film at River to River Film Festival, Florence, Italy. The win also secured two more screenings in Italy for the film, one each in Rome and Milan.

Through my brother's FB account, we have shared this news with all. And we have been receiving congratulations from all our well-wishers. And the first thing most of them ask is - you must be partying hard, right?

Well. No. We did celebrate in our own little way, but our degree of celebration would disappoint most of our friends' expectations. The most important thing at this moment is not all the accolades that we won, but the desire to repeat it again, and more importantly, do that with a much better film. The most important thing, in fact, is not a repetition of all the perks and praise, but to ensure that our next film is a better cinematic work - with only the two of us, Devanshu and I, being the judge of the same.

Each film, I believe, results in three different kinds of results that the film-maker should respect and be aware of. The first is the maker's feeling toward what he created. In our case, we are proud of the film, mainly because it taught us more about film-making than anything else, and we know that a lot of things fell in the right place to make this happen. But the merits of the film are equally glaring in comparison with the shortcomings, which we feel are many and need to be taken care of. However, the second result is the way audience reacts to the film. If they love your film, you have to respect their reaction, as much as you have to accept their disapproval for it. And the third result is - how you can use your film for professional gains - from monetizing it, to using it as a PR tool, to anything and everything that may help you as a film-maker. Even if I hate my film, and the audience hates it, I should still try to maximise my returns. I cannot abandon the film, because costs involved in film-making and lack or availability of opportunities are as important as our craft and the specific successes or failures. These three results are and should be mutually exclusive of each other and a wiser film-maker will never try to mix the three and hope for the best in all these fronts.

At times we will click. At times we won't. The only way forward is through this maze of differing perspectives and the hide-and-seek opportunities play with you. And the only real tool you have is the desire to create something new, and hopefully impressive. All the past projects - good or bad - and memories and learnings associated with them are only the building blocks of the next. Celebrations included.
Posted by satyanshu singh at 1:49 PM