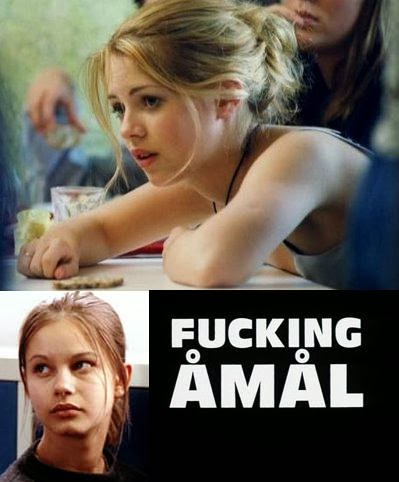 The recently concluded Berlin Film Festival awarded the top prize to the Chinese film, 'Black Coal, Thin Ice' (2014), making it one of the most eagerly awaited films for cinephiles all across the world. The third film by director Diao Yi'nan has also placed him as another film-maker from China whom the world will be following.

Meanwhile, in the last few weeks I had my own 'Berlin in Andheri' film festival, watching all kinds of films, and discovering some new film-makers - previous awards-winners. The 18 films that I watched as part of this year's festival are the following. Some of them are available on YouTube.

4. Elite Squad (2007/ Brazil/ Jose Padilha) Won Golden Bear in 2008. Watch it if you want to see a foreign-language film that is as stylish and accessible as the best of Hollywood. And then watch its sequel, which is also in IMDB Top 250 currently.

5. Gloria (2013/ Chile/ Sebastian Lelio) Won Silver Bear for Best Actress to Paulina Garcia and two more awards in 2013. Watch it for its brutally honest take on growing old without a partner.

11. The Apprenticeship of Duddy Kravitz (1974/ Canada/ Ted Kotcheff) Won Golden Bear in 1974.
Watch it for the performance of Richard Dreyfuss.

12. Early Works (1969/ Yugoslavia/ Zelimir Zelnik) Won Golden Bear and Youth Film Award in 1969. Watch it if you are interested in socialist ideology and/or the form of cinema.

14. The Road to Guantanamo (2006/ UK/ by Mat Whitecross and Michael Winterbottom) Won Silver Bear for Best Director in 2006. Watch it for the way it blends drama with documentary.

15. All Things Fair (1996/ Sweden/ Bo Widerberg) Won Special Jury Prize in 1996. Watch it for its sensitive portrayal of a forbidden love.

18. Closing Film: Sophie Scholl - The Final Days (2005/ Germany/ Marc Rothemund) Won Silver Berlin Bears for the director as well as for the actress, Julia Jentsch. Another film on the Resistance against Nazis. But extremely powerful and involving.
Posted by satyanshu singh at 11:07 PM No comments:

Thank You, my Blog! 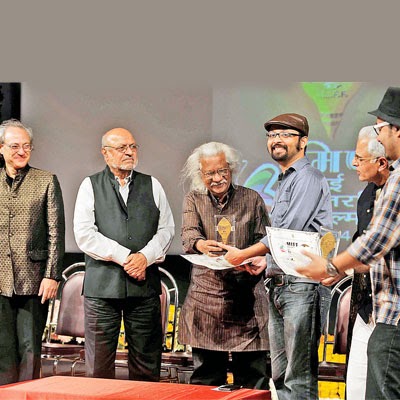 I am generally not comfortable using the space on this blog to upload pictures about Devanshu and me receiving prizes or attending film festivals with our film. But something happened last evening that forced me to do this. And I am not talking about the three awards that we won last evening. Please allow me this indulgence, and read on...

In the year 1994, the documentary that won the Golden Conch at 'Bombay International Documentary Film Festival' was "Manufacturing Consent: Noam Chomsky and the Media" by directors Mark Achbar and Peter Wintonick. Twenty years later, in February 2014, the festival, now known as Mumbai International Film Festival (Shorts, Animation, Documentary), had Mark Achbar as the head of one of its juries. Peter Wintonick had passed away less than three months ago and the festival began with a homage to him. "Manufacturing Consent" in these twenty years had already become one of the most famous documentaries in the world.

At the award function, the Mark Achbar led jury was also responsible for the four awards in the Short Fiction (National Competition) category. And three of those awards came our way, for our little Kashmiri film, Tamaash, the awards for Best Cinematography (Sahir Raza), Best Sound (Yatin Dabhi, Manoj Sikka, and Abhishek Bhattathiri), and Best Film. It was incredible and overwhelming, and perhaps the best part about it was something I could not experience - my family could watch the program live on National TV back home!

At the dinner after the awards, Mark and his wife gracefully approached me to congratulate me for the film. "Now I can talk with you", he said. We had a long chat, about our film, other films in competition, about the brother-duo in Devanshu and me, about how the Coen brothers work, and about the three years his wife had spent in Bombay as a kid way back in the 60s. However, the biggest and most pleasant surprise for me was when he said, just after the first line, "So is it you who writes the blog, or is it your brother?"

I was staring at his face with wide eyes and a shocked smile, wondering how he got to read my blog. "After watching your film, one of the jury members looked you up on Google. And he shared your blog with us. We read your post on 30 things you learnt while making a short film." It is a post more than two years old. Even I didn't remember if it were exactly 30 lessons and hence was not sure if it was this blog he had read. But then, mentioning the name of the blog made it clear.

Am I exaggerating when I say that this was perhaps as memorable a moment for me as it was going up the stage and winning the awards? This blog has been a sacred space for me, to talk about my love affair with the movies, and until now I have not actively shared it with people. But to know that Mark Achbar and other jury members came here on this cyber space and went through some of my articles is humbling and inspiring at the same time.

Thank you, my dear blog! You have been the source of very special joys!
Posted by satyanshu singh at 10:20 AM 3 comments:

A 50-Min Video Discussing 'the Greatest Film Ever Made'

If you have watched 'Citizen Kane' and wonder why it is considered the greatest ever in the history of cinema, may be this 50-minute video may answer some of your questions.

I have not spent so much time studying any other film. Despite that I learnt some new things about it in this brief and well-made video. Honestly, the three-hour lecture I get to take on this film, as a part of the course for the BMM students, is one of my favourites. I don't know if it is possible to determine the greatest among all films. But as long as they say it is 'Citizen Kane', I don't mind!
Posted by satyanshu singh at 9:59 PM 2 comments: