A Wonderful Gift for True Cinephiles 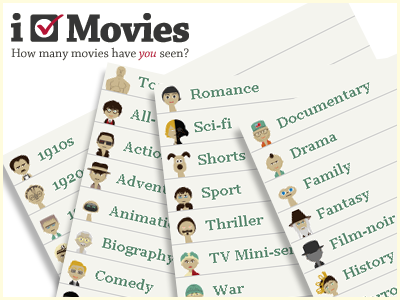 Here is something that I discovered recently, a web-site for you to check all the movies you have watched! I am writing about it to share with all my fellow cinephiles this new-found gift to me from the world of internet. Because this, dear friends, is really awesome!

To be honest, if you have watched hundreds and thousands of movies from different countries and eras, after a time you do get confused about a certain title - whether you have watched it or not. It may appear lame - because it doesn't happen with the books that you have read, right? But it does happen with short stories. If you name a certain O. Henry story, chances are that I may not be able to recollect what it was and hence not be sure whether I have read it or not. Hence, a permanent and easy-to-sort checklist does help. Since October of 2006 I've kept a record of all the movies I've watched in the diaries of respective years, but it is in different diaries, and cannot be sorted. IMDB gives you options of 'checking' the movies you have watched, and until now the IMDB watchlist was the most efficient and easy way for me to keep a record.

But iCheckMovies is several times better. For me, the best thing it has done is the time it saves every day that I spent on poring over my collection of 'greatest movies lists'. There are different lists that I had with me, as .doc(x) files: IMDB 250, Oscar winners, Cannes top films, Roger Ebert's list, AFI, Cahier du cinema, Sight and Sound, WGA, TSPDT, Guardian's top 1000, and so on. Every time I watched a film, I used to search for it in each and every list of mine and mark it as 'watched' in all of them. Plus, I had to keep a mechanical count of each list. If I discovered a new list, I had to spend a lot of time to go through each of its titles, one by one, to check my score. I was happy doing it, and I spent some minutes every day on them, but it did make me feel guilty - of wasting time over something that most would consider a useless and indulgent exercise. But the hardcore, true, sincere, obsessed cinephile won't. We know how much pleasure we derive from it. And hence I carried on with that mechanical checking and counting.

This website has suddenly made things extra-ordinarily easy for me. After watching a movie, if I check it, it is 'checked' in every list it appears in. And there are hundreds of lists there - more than I was aware of, and definitely much more than I could have managed on my own. Plus, there are awards!

The website awards you for your scores on different lists. If you have watched half the number of movies in any list, you get a Bronze, 75 per cent score earns you a Silver, and 90 per cent enables you a Gold. As on date, I have got 25 Bronze Awards on my shelf (Ebert's list, Sight and Sound etc.), 20 Silver (Rotten Tomatoes, AFI etc.), and 3 Gold (IMDB 250, 50 Greatest Crime Films and 50 Greatest Films from the 1960s). There are also Platinum awards - I have none of those. Perhaps it will be earned once I finish watching all movies in one of those lists. And one more thing. These lists keep getting updated (e.g. IMDB Top 250 changes regularly). So it is possible that your score on a certain list falls on a certain day. This also means, these awards are not to be taken for granted. They will be snatched back if your score goes below the cut-off for that certain award. Guess, that is to keep us on our toes and make sure that we keep watching, endlessly, forever! Isn't it amazing? So now go ahead and check all the movie you have watched. Like me, you may end up spending your first day on checking hundreds of them! Have fun, and let me know your scores and awards! :)
Posted by satyanshu singh at 12:57 PM