Discovering the Beatles #1: Please Please Me 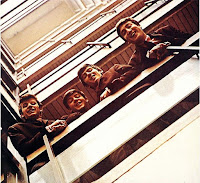 'Please Please Me' was the first studio album by The Beatles, released on the 22nd of March, 1963. Twenty-one years later, on the same day, I was born in a middle-class family from a small town in Bihar. It would take me another three decades to eventually kick-start my discovery of perhaps the most influential, popular and best-selling rock band of all time. I decided to start with their very first album, listen to it for a couple of months and then move on to the second album and so forth. Doing that I will perhaps have some idea of the evolution of their music and a taste of the era when they dominated the music scene. In my own way, I'll wait for the next album and then compare it with the previous ones. I'm going to document my discovery of their music on this blog. So you can expect a Beatles-post every couple of months or so.

There were some striking observations I had as soon as I started listening to 'Please Please Me'. One, the songs are so full of love and joy that you find yourself smiling and tapping to them almost unknowingly. Their music does not try to impress you, or give you something very profound. It talks about simple things, mostly love and heartbreak. Hence, I think no one would pretend to be a fan of the Beatles. Being a true Pink Floyd fan is cool, and impressive. That's not the case with the Beatles. You don't love the Beatles, you fall in love with them. And once that happened to me, there was no turning back. I started reading about them, watching the video recordings of the songs from the album, listening to the original songs whose cover versions they did in this album and also listening to the cover versions by other artists of their originals. Another observation, that I eventually had, was the use of harmonics in their songs, something that they later used gloriously in the track 'Because'. More about that later. As of now, let me share with you my thoughts on 'Please Please Me'. You may want to click on the links highlighted below to enjoy the songs and the videos as you read.

There are 14 tracks in this album, eight of which are original songs. 'I Saw Her Standing There' is my personal favourite. There is nothing in the lyrics that I would relate with. But the tune and the rhythm just makes me so happy every time I hear it that I fell in love with it. I also like this cover version a lot, by Tiffany, that came twenty-five years later.

This video that captures the Beatles perform 'Love Me Do' fills me with love and sadness at the same time. A 23-year old Lennon playing the harmonica evokes awe and a sense of terrible dramatic irony. The only thing that comes to my mind as I see his wonderfully chiseled face is that he will be murdered less than eighteen years later. George Harrison, only of twenty, looks like a bemused child. He will eventually fall in love with the Sitar and the Hindu philosophy and introduce his band-mates to India. Ringo and Paul would be the last two surviving members when Harrison would die of cancer at the age of 58. The joyful legacy that the four have created comes across so effortlessly in this track.

'Ask Me Why' is my third most favourite tracks of this album. Also, now I love 'Please Please Me' a lot, although it took me some time to appreciate the title track. I like 'There's a Place' for I can completely relate with its lyrics:

'P.S. I Love You', 'Misery' and 'Do You Want to Know a Secret' are my least favourite, but I like them anyway. When I play the entire playlist of this album, I never skip a song. Even the six cover versions are worth listening to. In fact, I really really love 'Anna (Go With Him)' which was originally written by Arthur Alexander, although I must admit that the original appears to be more poignant and moving than the Beatles cover version of it. I also love 'A Taste of Honey' that always reminds me of the opening credits of a Western movie, the images of lonely cowboys on long journeys. Also very uplifting are 'Baby It's You' for its wonderful backing vocals, 'Boys' for its bass line and 'Twist and Shout' for Lennon's exhausted voice, and I prefer them over 'Chains'.

During the time when the album charts in the UK were dominated by easy listening vocals and film sound-tracks, 'Please Please Me' gained the top position in May 1963 and stayed there for thirty weeks, to be replaced by the second album by the Beatles. As many as ten of these fourteen tracks were recorded by the Beatles on a single day, 11th February 1963. The English author and historian, Mark Lewisohn, would later claim those 585 minutes to be the most productive in the history of recorded music. The 50th anniversary of that day was celebrated by modern artists re-recording those ten songs in just one day at the same venue - EMI Studios at Abbey Road, London. Watch this one-hour BBC documentary on how London celebrated the 50th anniversary of the first album by four boys who were to change the world music scene forever.

'Discovering the Beatles' is my documentation of discovering the music of the legendary band, album by album over several months. Click here and read from bottom upwards for the entire series.
Posted by satyanshu singh at 12:40 PM