I should have published this in March, when this amazing list of the Greatest Films of the 21st Century was updated. Anyway, here is my annual list of Top 10 Directors with the most impressive filmography this century. This ranking considers the number of movies each director has in Top 1000 as well as the respective ranks of their movies. 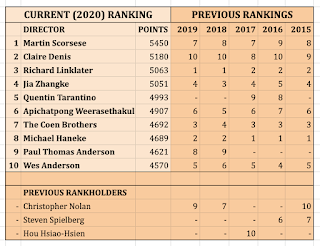 There are three names who have been a part of the top ten in one or more of the previous years. Christopher Nolan is currently at #11. With this year's 'Tenet' he may regain his position in the top ten next year, as he is only six points behind Wes Anderson. Hou Hsiao-Hsien is at #14. He hasn't had a release since 2015's 'The Assassin' and there is no word on his next, 'Shulan River', that was supposed to be out this year. Steven Spielberg has come down to #19. So it is unlikely for Spielberg to find a spot in the top ten anytime soon. At #12 we have Alfonso Cuaron. His next is a series/show and we do not when it will be out.
Let us check out this year's rank-holders now:
10. Wes Anderson (51-year old American filmmaker): Down to #10 from #5, Wes Anderson is only 117 points behind his last year's score. This means the ranking of his films has not changed significantly. Only other filmmakers have surged ahead. His next film 'The French Dispatch' is likely to debut at Cannes 2021.
9. Paul Thomas Anderson (50-year old American filmmaker): He is down by one position. His next, yet untitled film that stars Bradley Cooper is expected to be out in 2021. Also, he is only 68 points behind Haneke and 71 points behind the Coen Brothers. Hence, we can expect him to climb up in the next year's rankings with very few changes in the overall list of top 1000.
8. Michael Haneke (78-year old Austrian filmmaker): Losing six ranks, and out of the top two for the first time since I started publishing these rankings, this looks like a big fall, although the rankings of his movies are intact. His last film 'Happy End' (2017) has failed to make it to the top 1000 and it looks Haneke's presence in the top ten will be over sooner than we expected.
7. The Coen Brothers (65 and 63-year old American filmmakers): Down four ranks, the Coen Brothers are only 74 points behind their last year's score. This means the rankings of their films have hardly changed. 'Macbeth' directed by Joel Coen will be out in 2021. There is no news of Ethan's next.
6. Apichatpong Weerasethakul (50-year old Thai filmmaker): After the decade's best lists were published, 'Cemetery of Splendour' moved up more than 300 ranks on the Top 1000 list. This has single-handedly caused Weerasethakul's increase in points, although his rank is static. His next is 'Memoria' starring Tilda Swinton and comes out in 2021.
5. Quentin Tarantino (57-year old American filmmaker): With the entry of 'Once Upon a Time in Hollywood' (2019) at #132, Tarantino has scored close to 670 points more than last year, thus leaping from #11 to #5 this year. Although there is no announcement of his next, it looks like Tarantino will stay in the top ten for some time now.
4. Jia Zhangke (50-year old Chinese filmmaker): The entry of 'Ash is Purest White' has caused a 300-point increase in Zhangke's score and has ensured that he holds on to his rank. His latest work is a documentary, 'Swimming Out Till the Sea Turns Blue', that screened at Berlin this year. Whether it makes it to the Top 1000 next March or not may cause a change in Zhangke's score and rank.
3. Richard Linklater (60-year old American filmmaker): After staying at the top for two years, Linklater is down to rank #3. But the rankings of his movies has hardly changed. This only means that the top two names this year have surged ahead with the help of their latest releases. His next, 'Apollo 10 1/2', comes out in 2021. There are three other projects that have been announced with him at the helm.
2. Claire Denis (74-year old French filmmaker): The entry of 'High Life' and the improved ranking of 'Let the Sunshine In' has resulted in an 841-point increase in Denis' score. So far she stayed among #8 to #10. But now she is at #2. This, and the topper of this year's list, proves how dynamic this list is. Her next is 'The Stars at Noon' starring Robert Pattinson and it comes out next year.
1. Martin Scorsese (77-year old American filmmaker): 'The Irishman' entered the list at #125 and gained 989 points in the total score. This is what a massively acclaimed film can do to a director's filmography. This also ensures Scorsese's position in the top ten for the next few years. His next, 'Killers of the Flower Moon', starring Leonardo DiCaprio and Robert De Niro, comes out in 2021.
With the Coronavirus pandemic massively impacting shoots and releases this year, we do not expect many new movies to enter the Top 1000 ranking next year. But that does not mean the rankings will stay mostly static. The difference in scores for various filmmakers is negligible and just a few changes in the Top 1000 may greatly change the rankings. What we can be sure of is that the list I publish in 2022 will be very interesting. Two years can be a long time and greatly affect a list as dynamic as this. For that, and for more great movies to arrive, we will have to wait.
Posted by satyanshu singh at 10:39 AM

Labels: Talking About the Masters