Based on this list of the Greatest Films of the 21st Century, here is my annual list of Top 10 Directors with the most impressive filmography this century. This ranking considers the number of movies each director has in Top 1000 as well as the respective ranks of their movies.

Wes Anderson (#11) is out of top ten for the first time in seven years, since I have been making this annual list. However, he may return to the list next year as his latest release ('The French Dispatch') is likely to feature in the top 1000. Pedro Almodovar (#13) also has an outside chance as his latest release ('Parallel Mothers') has been received well. Steven Spielberg (#17) should also climb up with the help of 'West Side Story' but it is less likely that he will make it to top ten. The top ten directors as of now are: 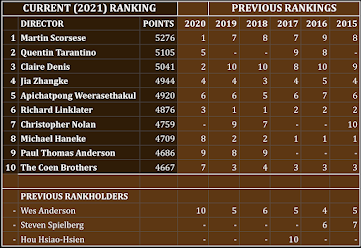 10. Joel and Ethan Coen (American filmmakers, 4667 points): Down from #7, the Coen brothers have managed to stay in the top ten by edging out Wes Anderson. It is difficult to predict what will happen next year despite Joel Coen's latest 'The Tragedy of Macbeth' doing well.

9. Paul Thomas Anderson (American filmmaker, 4686 points): PTS manages to hold on to #9 and stays in the top ten for the fourth consecutive year. His latest 'Licorice Pizza' has been received very well and hence it looks like his position will only improve next year.

8. Michael Haneke (Austrian filmmaker, 4709 points): After staying in the top two positions for the first five years, Haneke had a steep fall last year, to #8. This year he holds on to the position. It will be interesting to see how the latest releases of all names mentioned above affect Haneke's position as he does not have anything coming up.

7. Christopher Nolan (British-American filmmaker, 4759 points): Thanks to 'Tenet', Nolan is up from #11 and back in the top ten. His next film will be out not before 2023 and hence chances are that his rank will fall again, especially with other filmmakers having their releases in 2021 and 2022.

6. Richard Linklater (American filmmaker, 4876 points): After staying in the top three positions for six years, Linklater is at his personal lowest rank of #6, because his movies, especially 'Bernie', have lost ranks. Since his next release ('Apollo 10 1/2') is in 2022, chances are that Linklater, my favorite filmmaker on this list, will keep losing ranks.

5. Apichatpong Weerasethakul (Thai filmmaker, 4920 points): Back in the top five, Weerasethakul is expected to climb ranks with his latest release ('Memoria') doing really well. He is the only filmmaker in the top eight who has had a release in 2021. It will be interesting to see what this does to the next list of top ten. Note that he is only 24 points behind Zhangke in this year's rankings.

4. Jia Zhangke (Chinese filmmaker, 4944 points): Despite his latest documentary ('Swimming Out Till the Sea Turns Blue') not making it to top 1000, Zhangke continues to be in top five, the only filmmaker to stay there all seven years. But his next feature has not been announced yet. Will he lost his rank, finally?

3. Claire Denis (French filmmaker, 5041 points): One rank down from last year, Denis continues to be in top three, and the only female filmmaker on this list all these years. Her next release 'The Stars at Noon' comes out in 2022 and so her rank may go down in the next rankings.

2. Quentin Tarantino (American filmmaker, 5105 points): Tarantino is up from #5, thanks to the improvement in the rankings of his movies in the top 1000. Of course, there is no announcement of his next, and hence he may lose ranks next year.

1. Martin Scorsese (American filmmaker, 5276 points): Despite five of his movies losing their respective ranks in the top 1000, most of all 'Shutter Island' that now barely survives at #953, Scorsese remains at the top for the second consecutive year. His next, 'Killers of the Flower Moon', comes out in 2022. And so it is possible that Scorsese loses his top position. But to whom, since no other filmmaker in the top eight, except Weerasethakul, has had a release in 2021? Let us figure this out in a few months as TSPDT releases its updated list.