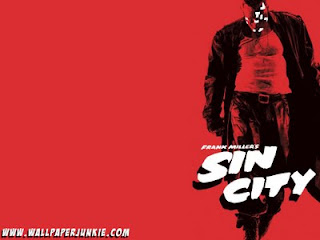 Cinema has always tried to translate expression from other media like the novel and the theater, and with an obvious arguable success. Three years ago, I came across this movie, especially recommended by my friend. Today, I’m writing what I feel about it, as asked by another. And as I write these words, I can still recount the experience I had had while watching this unique celluloid translation of the popular graphic novel, .

Those were the days when I was extremely critical about the stuff I watched, and appreciated. I was extremely choosy and for me the best form of cinema was the realist film with a purpose, a theme, a moral. But as the film opened, I was struck by its beautiful imagery and uplifting score. I don’t remember, but perhaps it was some saxophone playing. And there was this bold use of colour, or the lack of it. It was a visual I had never ever seen in my life. Or had I? This film had indeed managed to infuse life into the art of the graphic novel. For the next couple of hours or so, as I gazed transfixed at the amazing blend of beauty and disgust, I felt the makers shouting in my ears: “We would bullshit! And you would sit and watch!! And it would last as long as we want it to.”

I didn’t feel for the characters, but I admired some of them and hated others. As the film is a series of loosely-linked short stories, there was not a definite graph of emotional connect that I had for it. Instead, it was like being engrossed without being attached. Love making scenes had hardly appeared so magical. Action had hardly been so daringly ruthless. I can not forget two scenes: one that involved the death of the ‘Yellow Demon’, I don’t remember his name, if he had any; and the scene where Elijah Wood’s character gets his limbs, and eventually the whole body, chopped off, and the smile on his lips just refuses to fade away. The directors (there were three of them – Frank Miller, Robert Rodriguez and Quentin Tarantino) succeeded in such sequences and more because they willingly ignored the realistic temperament inherently associated with film and took a sort of expressionistic approach, greatly inspired by the original graphic novel – a medium where things are indeed magically beautiful but essentially unreal, where stunts are indeed most daring. If any attempt was made to dilute this impact, it would have been just another movie, far from being an adaptation of the original, and an exceedingly disappointing one. Although, the film lacks a connection at emotional level, and those who fail to appreciate its imagery and style might choose to leave it mid-way, or even before, I feel its overtly non-sentimental approach was its style statement and its merit. For me it was a pure cinematic experience.

Having a clear cinematic vision is a rare virtue and being able to achieve that requires tireless effort and character, and most of all – honesty. Whatever seems apparently, I would call one of the least pretentious movies. Today, three years later, I am a lot more acceptable to film expressions ranging from purely abstract to purposefully documentary, from silent melodramas to long hours of subtlety. I still, at least through the films I want to make, would like to choose issues and convey meaning in a way as realistic as possible, and would like to be known as a maker of serious, important and effective cinema. But I would be equally proud if I could make a film like this. Bullshitting can be fun. And doing it with sincerity and honesty, very much an art. And it finds its patrons. The cult popularity of this film is a fact as true as its merits.

P.S. I just found out that his name was The Yellow Bastard. I love him!

Posted by satyanshu singh at 10:22 PM