The First to Talk as they Fought 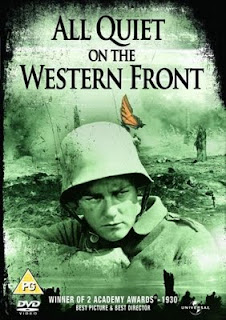 Perhaps the oldest talkie I have seen is Lewis Milestone's 1930 epic All Quiet on the Western Front. It is considered possibly the first War film with sound that not only set an standard for war films, it gave birth to the numerous cliches that now essentially find their way into this genre. While watching it, I was reminded of the entire range - from Saving Private Ryan to Border to No Man's Land. I do not generally prefer war films these days, after having seen so many of them. But this one was special. The scale on which it was made - shot over an area of about 700 acres with thousands of extras, and the incredible montage it uses to present the elaborate battle scenes, it is worth a watch even today, eighty years since it was released. The following link can give you a glimpse of the epic that it was: http://www.youtube.com/watch?v=tXKq73fSQT0

Based on a German novel Im Westen nichts Neues by a war veteran, Erich Maria Remarque, the film was awarded the Best Picture and the Best Director at the third Academy Awards. It tells the story of young and disillusioned German boys who enlist themselves in the army during World War I, only to suffer extreme mental and physical trauma, realizing that "death is stronger than duty to one's country" and "when it comes to dying for your country, it's better not to die at all!". Later, on returning from a leave, and experiencing a strange detachment from the civilian life, the lead character tells his fellow soldier: "It's not home back there any more... At least we know what it's all about out here. There are no lie here." The film, thus, does not glorify war or sacrifice in the name of patriotism, and has an extreme anti-war statement. They said the League of Nations should secure a print, dub it in all languages possible, and use it for promoting peace.

The psycho-political issues aside, All Quiet on the Western Front is a landmark film due to its historic and aesthetic importance in cinema. It was remade as a TV film in 1979 and another remake is under production now. I sincerely doubt, however, that it can match the achievement of the original. German soldiers talking in English throughout - they got away with this way back then. Today, it would seem ridiculous.
Posted by satyanshu singh at 10:39 PM