How to Begin: Illustration (Opening Scene from ‘Blood Simple’) 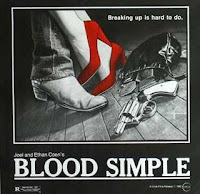 The opening scene of the film, needless to say, is vital. Very vital. Screenwriting gurus teach you all sorts of mantras to follow as you open your first scene, and thus your film. Following is the opening scene from ‘Blood Simple’ (1984). This was the first film written-directed by the Coen Brothers, the first signs of their genius. Watch the film, now. If you can’t, well, just read this scene. In my next post I will discuss the beauty of it.

Note: The numbers in parentheses are for reference. Read my next post for that. Also, I have made minimal changes to the draft of this scene, for convenience only.

INT. CAR – NIGHT
Backs of two people in the front seat-- a man, driving, and a woman next to him. Their halting, awkward conversation punctuated by the occasional glare of oncoming headlights and the roar of the car rushing by. The windshield wipers wave a soporific beat. (1)

Pause, as an oncoming car passes.

Another pause. Another car. Suddenly:

BRAKE Stamped on. The car squeals to a halt. A car that has been following screeches to a halt just behind it. Both cars sit. Rain patters. (11)

She doesn't answer. He turns to look back and we see his face, for the first time, in the headlights of the car behind, waiting, patiently. Rain drifts down past its headlights. Finally it pulls out and passes them slowly, their headlights showing it to be a battered green Volkswagon. First the car itself, then its red taillights, disappear into the rain.

She looks at the man.

WOMAN "Ray. Did you mean that, what you said before, or were you just being a gentleman?"

MAN "I mean, I ain't a marriage counselor--"

The man is uncomfortable.

The woman is uncomfortable. After a long pause:

Labels: Hollywood and Around, Reading Film, Screenwriting, Talking About the Masters