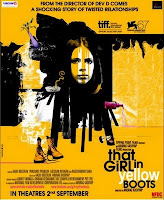 For their ‘Understanding Cinema’ project, my students are busy making their short films. I have required from each group, apart from their films, a poster, a trailer, a PR news article, and a film review. My intention was to make them realize the importance of marketing in this form of ‘art’ and ‘communication’. And they have responded with excitement. They have gone ahead to find different ways to create a buzz for their movies.

It started with a group starting a gossip blog reporting the making of its film. Another group followed, by creating their protagonist’s blog, and thus having us interact with the character even before the movie was shot. This blog is particularly beautiful, though not as sensational as the previous one. But this kind of publicity goes well with the topic this group is working on, which is ‘Hindi Parallel Cinema’ – thus focusing on its target group of artsy audience. There is another group circulating their own version of Mumbai Mirror – with gossip articles added to the already spicy daily. I love their enthusiasm. Other groups are launching their production house logos, and I’m amazed to see the technical expertise they have at their age. But the group that has managed to impress me the most is the one exploring the topic of ‘French New Wave’. Instead of creating a blog, they have created a Facebook page, thus managing to reach, and more frequently so, a wider audience. Apart from this, they are already uploading Teasers on YouTube, which are very true to their topic and really interesting.

All this exercise is important in order to really ‘understand cinema’. The commerce of this expensive medium can not be ignored and the only way to survive in this business is by keeping the finances correct – you can even survive making truly bad movies if you have got your monies right. And because of the unpredictable nature of this trade, that is a real challenge.

Had a chat with Anurag Kashyap at a preview of his latest film. He has reduced this game to a simple arithmetic, and that makes sense. For a movie with the production budget of, say, two crores to break even at the box-office, around 4-5 lakh people should walk into the theatres. This should happen within the few weeks of the movie’s stay at the theatres, and includes the movie-going audience all across the country. The point is, considering the population of some of the major cities in this country, this number is hardly significant. Five lakh people from all over India is really nothing. But we still can not guarantee that they will come, willing to spend on a movie. There are two things we can interpret from this – the film business in India is yet to tap its fullest potential (consider this – only 2 to 3 crore Indians watched ‘3 Idiots’ in theatres), and the need is to devise a marketing strategy that manages to achieve the cut-off figure mentioned above (which will be around 50 lakh footfalls for a 20-crore movie). This latter issue will determine the success story of new cinema and new film-makers.

P.S. I think ‘That Girl in Yellow Boots’ is an important film, but I didn’t like it. Now, if 100 people don’t watch it because of my opinion mentioned here, I have caused a loss to the target figure of 5 lakhs. See, how difficult it is!
Posted by satyanshu singh at 1:33 PM