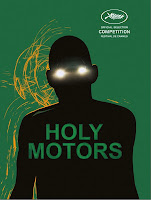 There are certain types of movies that are essential to complete your film fest experience. Let me indulge further on this and share with you what, according to me, are those categories:
1. Structurally twisted or abstract films, which leave the audience puzzled and they do not know what to make out of it.
2. Painfully slow movies that crawl slower than a snail, causing most of the audience to fall asleep.
3. Fiercely violent movies where the slashing of flesh and bone is celebrated in unapologetic style.
4. Movies transcending all limits of graphic sex scenes and taboos, scandalizing the audience for life.

Please excuse this honest confession of my guilty pleasures, but it is high time I confess my strong love for such movies, and throughout the festival I hope to watch movies fulfilling these needs. It was satisfying to discover one such movie today. 'Holy Motors' (French, 2012) fulfilled three of the above-mentioned categories, more or less. But more than that, the film had some stunningly beautiful sequences, and in the end, the final shot of the film was unforgettable. For many it was the best film of the festival, and for some it was too baffling to comment. I'm almost tempted to recommend this movie as a must-watch-before-you-die. But for now, I would just let you watch its trailer by clicking here.

Also watched, and enjoyed, the subtle Danish drama 'Teddy Bear' (2012), and the dark comedy on the cultural phenomenon of reality television - 'Reality' (Italian, 2012).

After a great festival, the last thing you want is an unworthy closing film. That is one prayer I always have on my lips - that the last film shouldn't disappoint me. Watching 'Blancanieves' (Spanish, 2012) was such a pleasant surprise. It was a silent, black and white film, in 1:1 aspect ratio, a dark, melodramatic take on the story of Snow White and the Seven Dwarfs. The innocent magic of pure cinema, as I like to call silent films, was just the perfect way to end this festival.
Posted by satyanshu singh at 2:50 AM